There are few towns in the world that played such a fundamental role in the development of mining and metallurgy as Jáchymov/St. Joachimsthal, which for a short period of time in the 16th century represented the most important silver mining district in the Ore Mountains, Europe, and the world. The town, founded in 1516, is regarded as one of the birthplaces of mining, metallurgy, mineralogy and economic geology, the foundations of which were laid here in the 16th century by Georgius Agricola, Jáchymov’s town physician. His extensive compendium entitled ”De re metallica libri XII“(Twelve Books about Mining), published posthumously in Basel in 1556, can be considered as the first comprehensive scientific treatise dealing with mining, metallurgy, mineralogy and economic geology. As a basic textbook of the mining sciences, it served in Europe and other parts of the world for more than 200 years.
As a place where the silver ‘thalers’ (abbreviation from Joachimsthaler, i.e. coming from Joachimsthal/ Jáchymov) started to be minted in large quantities from 1520, Jáchymov’s Royal Mint is a testimony of the enormous role of the town in the development of early modern European and later world currency systems. In most European countries, the thaler became synonymous with the name of large silver coins used in trade and, as a means of payment; it was used until the 1870s. After reaching the American continent in the 18th century, the thaler gave its name to the dominant world currency, the dollar.
During the boom of mining in the 16th century, considerable progress was made in Jáchymov in mine water drainage, especially by the introduction of piston pumps and the flat rod system, a specific pumping system which was invented in Jáchymov in 1551. This machine, allowing the transfer of the rotational movement of the water wheel to vertical movement through a system of up to 1.5 km-long connected rods, spread quickly in particular in the Saxon, Harz, Slovak and other mining districts, where it remained in use until the 19th century.
Jáchymov is also highly important for the development of early legal regulations pertaining to mining and forestry. The Jáchymov mining order (1542, 1548) became a model for most mining districts in the Bohemian Kingdom until the 19th century as well as for many other mining districts in the Habsburg monarchy in Europe.
The building of the Royal Mint also attests to the importance of Jáchymov in developing the educational system for mining as the world’s first state mining school was founded here in 1716. This school became a model for similar schools in the Habsburg monarchy (e.g. in the Slovak mining town of Banská Štiavnica), in Saxony and other places in Europe.
Jáchymov Mining Landscape also attests to the worldwide unique role of Jáchymov in the history of research, mining and processing of uranium ores. Already the old Jáchymov’s miners of the 16th century knew the black heavy mineral which often accompanied the silver and cobalt ores but no utilizable metal could be extracted from it, and therefore, it was nicknamed “pitchblende”, In 1727 the uranium ore from Jáchymov served the German mineralogist, Franz Ernst Brückmann (1697-1753) for the first scientific description of the pitchblende. In 1789 the German chemist, Martin Heinrich Klaproth (1743-1817) announced, after studying pitchblende from Jáchymov and Saxon Johanngeorgenstadt, a discovery of a new element, uranite (in fact it was a uranium oxide, pure uranium was isolated only in 1841 by French chemist, Eugène-Melchior Péligot). Klaproth’s achievement triggered a new wave of research of uranium compounds which were first used mainly for colouring glass or chinaware. From the 1840s, the uranium ore started being systematically extracted in Jáchymov for the first time in the world. In 1854, a new uranium dye factory was opened in Jáchymov using the first ever industrial process invented by the Czech chemist, Adolf Patera (1836–1912).
In 1898 the radioactive elements radium and polonium were isolated for the first time from Jáchymov uranium ores by Marie Curie-Sklodowska (1867-1934) and her husband, Pierre Curie (1869-1906). In 1905 the radioactivity of the Jáchymov mining waters was confirmed and in 1906 the world’s first radon spa for treatment of movement system diseases was founded here. In 1908 the production of radium salts was launched in Jáchymov which enjoyed a global monopoly in this field until the First World War. After the Second World War the Jáchymov mines were the first which were used by the Soviet Union for extracting uranium necessary for the production of the Soviet nuclear bomb in 1949. Jáchymov monuments to uranium ore mining are also inextricably linked to the establishment of forced labour camps in the 1950s. They cogently document the importance of this component part that provides unparalleled testimony to the extraction of a raw material for military purposes.
Due to an exceptional variety of ores mined in Jáchymov, this place belongs to one of the world’s richest mineralogical sites with over 400 mineralogical species described up to the present day (new species may still await discovery). A valuable collection of Jáchymov minerals including more than 40 of those for which Jáchymov is a type locality (which were described here for the first time in the world) is housed by the Royal Mint Museum.

Elements of the Jáchymov Mining Landscape

The successful economic development of Jáchymov in the 16th century led to th...

Freudenstein castle is situated on a hill above the northwest edge of the tow...

The beginning of mining in Jáchymov and the foundation of the town itself are...

The Svornost (“Concord”) mine, founded in 1518, bears exceptional evidence of... 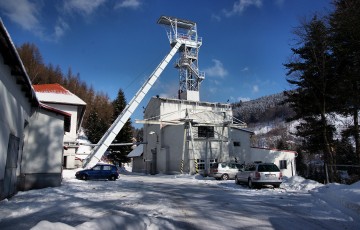 The line of heaps and shaft collapses on the Schweizer silver vein is an outs... 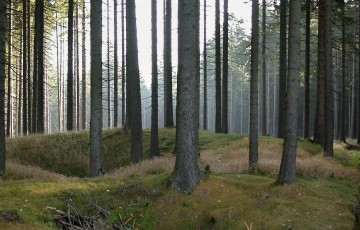 The Elias valley district is a place uniquely combining the well-preserved re... 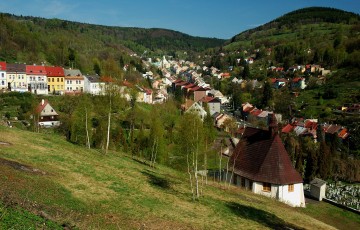 In order to explore uranium mineralization, the Adit No. 1 in the length of 2...